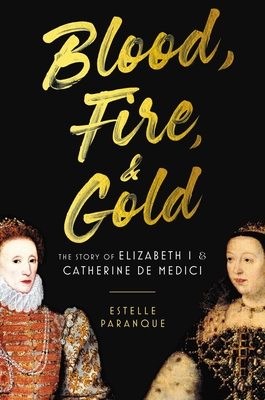 
A brilliant and beautifully written deep dive into the complicated relationship between Elizabeth I and Catherine de Medici, two of the most powerful women in Renaissance Europe who shaped each other as profoundly as they shaped the course of history.

Sixteenth-century Europe was a hostile world dominated by court politics and patriarchal structures, and yet against all odds, two women rose to power: Elizabeth I and Catherine de Medici. One a young Virgin Queen who ruled her kingdom alone, and the other a more experienced and clandestine leader who used her children to shape the dynasties of Europe, much has been written about these shrewd and strategic sovereigns. But though their individual legacies have been heavily scrutinized, nothing has been said of their complicated relationship—thirty years of camaraderie, competition, and conflict that forever changed the face of Europe.

In Blood, Fire, and Gold, historian Estelle Paranque offers a new way of looking at two of history's most powerful women: through the eyes of the other. Drawing on their private correspondence and brand-new research, Paranque shows how Elizabeth and Catherine navigated through uncharted waters that both united and divided their kingdoms, maneuvering between opposing political, religious, and social objectives—all while maintaining unprecedented power over their respective domains. Though different in myriad ways, their fates and lives remained intertwined of the course of three decades, even as the European geo-politics repeatedly set them against one another. Whether engaged in bloody battles or peaceful accords, Elizabeth and Catherine admired the force and resilience of the other, while never forgetting that they were, first and foremost, each other's true rival.

This is a story of two remarkable visionaries: a story of blood, fire, and gold. It is also a tale of ceaseless calculation, of love and rivalry, of war and wisdom, and—above all else—of the courage and sacrifice it takes to secure and sustain power as a woman in a male-dominated world.

A Times' "Book of the Week"

DR. ESTELLE PARANQUE is an Assistant Professor in History at NCH at Northeastern (London campus). She has been featured in several international historical television documentaries, including The Boleyns: A ScandalousFamily and Secrets d’Histoire, as well as the history podcasts like HistoryHit, Not Just the Tudors, and Talking Tudors. She is also the author of Elizabeth I of England Through Valois Eyes.

"A story told with verve and passion... a marvelous story of a relationship between two powerful women in an age when females were believed to be unsuited to the exercise of government."
—The Times (UK)

“Paranque deftly shows how their experiences shaped the women rulers’ relationships with their subjects, advisers and each other.”—Smithsonian Magazine