We Are All Whalers: The Plight of Whales and Our Responsibility (Hardcover) 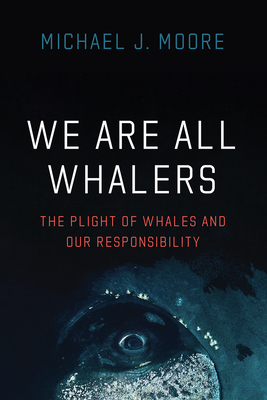 We Are All Whalers: The Plight of Whales and Our Responsibility (Hardcover)

Relating his experiences caring for endangered whales, a veterinarian and marine scientist shows we can all share in the salvation of these imperiled animals.

The image most of us have of whalers includes harpoons and intentional trauma. Yet eating commercially caught seafood leads to whales’ entanglement and slow death in rope and nets, and the global shipping routes that bring us readily available goods often lead to death by collision. We—all of us—are whalers, marine scientist and veterinarian Michael J. Moore contends. But we do not have to be.

Drawing on over forty years of fieldwork with humpback, pilot, fin, and, in particular, North Atlantic right whales—a species whose population has declined more than 20 percent since 2017—Moore takes us with him as he performs whale necropsies on animals stranded on beaches, in his independent research alongside whalers using explosive harpoons, and as he tracks injured whales to deliver sedatives. The whales’ plight is a complex, confounding, and disturbing one. We learn of existing but poorly enforced conservation laws and of perennial (and often failed) efforts to balance the push for fisheries profit versus the protection of endangered species caught by accident.

But despite these challenges, Moore’s tale is an optimistic one. He shows us how technologies for ropeless fishing and the acoustic tracking of whale migrations make a dramatic difference. And he looks ahead with hope as our growing understanding of these extraordinary creatures fuels an ever-stronger drive for change.

For more information on Moore’s book and research, please visit his webpage at the Woods Hole Oceanographic Institution.

Michael J. Moore is a veterinary scientist at the Woods Hole Oceanographic Institution. He lives in Marion, MA. For more information on Moore’s book and research, please visit his webpage at the Woods Hole Oceanographic Institution.
"The threat to whales goes beyond the conventional images of harpooning ships, according to this moving and impassioned debut from veterinarian and marine scientist Moore. . . . . Moore injects his descriptions of the dire situation with a personal angle, sharing stories about how he came to study and care passionately about whales, creatures with awe-inspiring intelligence and social skills but whose population is threatened by humanity. . . . Technology offers a ray of hope—in his final chapter, Moore describes how using ropeless nets for commercial fishing and studying whale population movements can prevent accidental collisions and lessen the death toll. This empowering call to action stuns."
— Publishers Weekly, Starred Review

“Moore, a marine scientist and veterinarian, makes a compelling argument that whales’ survival depends on each of us—not just on those who venture out on ships, hunting whales for meat and blubber. It’s sobering to grapple with the ways we might unwittingly contribute to the mammals’ demise, like by eating commercially caught seafood. But Moore also offers reason to be hopeful, including new technologies for ropeless fishing.”
— Washington Post, “15 Books to Read This Fall”

"After the world spent more than two centuries slaughtering whales to the point of near-extinction, international commercial whaling was finally banned in 1986. But in this highly persuasive book, the marine scientist Moore demonstrates that many of the gains are being undone by a combination of commercial fishing (in which whales are strangled with ropes and nets) and shipping (whales are often hit by passing cargo ships, and their songs are drowned out by the incessant drum of engines). The North Atlantic right whale’s population, for instance, has declined more than 20% since 2017. It’s not all doom and gloom, though: Moore (not to be confused with the filmmaker of the same name) furnishes solutions while sounding the alarm."
— Bloomberg, “Six Best Books This Fall”

"In. . . We Are All Whalers: The Plight of Whales and Our Responsibility, Moore writes that our choices about the food and other products we buy can make a difference in what happens to whales. The extension of that argument is that society as a whole could—and should—provide more support for fishers to move to ropeless gear."
— Monga Bay

"Whale hunters aren’t the only threats to the world’s largest mammal, argues marine scientist Moore in this treatise on protecting the animals and helping them thrive."
— Publishers Weekly, "Fall 2021 Announcements: Science"

"Moore goes where few scientists are comfortable to go, and where most scientists take deliberate steps to avoid. . . . His forty-three years of study, mostly focused on marine mammals, have exposed him to the animal pain and suffering side of what to many has been a mathematical exercise as North Atlantic right whale numbers freefall towards extinction—as they are beaten down by collisions with ships, entanglement in fishing gear, and climate change."
— Cape Cod Times

"A scientific memoir of over thirty years of research, a great tale of the sea, and a call to arms."
— Sirene

"Moore paints a comprehensive picture of the challenges facing right whales, emphasizing the role that everyone plays in their conservation... passionate and philosophical..."
— Whales Online

"A fascinating memoir by a marine biologist-veterinarian who has devoted his entire life to developing methods for saving wild whales in distress, especially critically endangered North Atlantic right whales."
— Forbes

"This is the book all conservationists wish they could emulate... What may be most notable about this text is the author's sensitivity not only to the species he covers but also to all stakeholders in whale conservation, from indigenous hunters to commercial fishers. It is a thoughtful treatise that, through fact-based analysis, leads readers to confront the root of the problem—choices consumers make in a post-industrial society... Moore offers a most outstanding example of communicating science to advance conservation... Essential."
— Choice

“Veterinarian Moore knows right whales inside and out, literally. Working chest deep in the guts of dead right whales, he sees, better than anyone, what’s killing them. It’s us. Moore describes how, demonstrating honestly, clearly, and compassionately the consequences of our cruelty, if inadvertent, toward a sentient animal.”
— Deborah Cramer, author of "The Narrow Edge: A Tiny Bird, an Ancient Crab, and an Epic Journey"

“An affecting book, authored by a man whose life has circled the great whales, and whose sense of concern and care for these animals has only deepened over time. Moore challenges us to confront how implicated we all are in the ongoing destruction of sea life—and leaves the reader with indelible images of the suffering of countless magnificent animals fettered, gagged, slashed, and lost in the fatal obstacle course we have made of their domain.”
— D. Graham Burnett, author of "The Sounding of the Whale: Science and Cetaceans in the Twentieth Century"

“A truly compelling, captivating, and in places heart-wrenching story of one scientist’s journey caring for a highly endangered species. The very predicament of North Atlantic right whales is our fault, and their recovery is also our responsibility, as we are all consumers and hence all culpable in the environmental costs of fish products and goods and services transported at sea. Coexistence with whales is possible, and Moore’s book lays the foundation.”
— Moira Brown, Canadian Whale Institute

“Most of us know that whales are in danger but have only a vague understanding of why. Moore’s perspective from personal experience is unique, and this clear book should be read by the conservation community, scientists, and anyone interested in nature and human-whale interactions.”
— Jane Maienschein, Arizona State University and the Marine Biological Laboratory

"Moore’s decades in the field were accompanied by a growing sense of urgency about one species in particular, the North Atlantic right whale. His new book, We Are All Whalers, looks back at his own life and forward to the tenuous future of these imperiled behemoths. He spent his career learning how to save right whales on an individual basis, with some success. 'But,' he writes, 'I also knew that prophylaxis had to be the ultimate goal of any veterinarian.' To save an entire species, Moore warns, we need a lot more hands on deck."