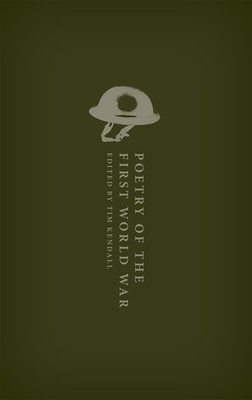 I love this edition, which includes some of my favorites poets (namely Sassoon and Owen.)  It's beautifully laid out and its pretty.

'What passing-bells for these who die as cattle?' The First World War produced an extraordinary flowering of poetic talent, from poets whose words commemorate the conflict as enduringly as monuments in stone. Their poems have come to express the feelings of a nation about the horrors and aftermath of war. This new anthology provides a definitive record of the achievements of the Great War poets. As well as offering generous selections from the celebrated soldier-poets, including Wilfred Owen, Siegfried Sassoon, Rupert Brooke, and Ivor Gurney, it also incorporates less well-known writing by civilian and women poets. Music hall and trench songs provide a further lyrical perspective on the War. The work of each poet is prefaced with a biographical account that sets the poems in their historical context. In addition, Tim Kendall's introduction charts the history of the war poets' reception and challenges prevailing myths about their progress from idealism to bitterness.

Tim Kendall, University of Exeter Tim Kendall has taught at the universities of Oxford, Newcastle, and Bristol before becoming Professor and Head of English at the University of Exeter. His publications include Modern English War Poetry (OUP, 2006), The Oxford Handbook of British and Irish War Poetry (ed.) (OUP, 2007), and The Art of Robert Frost (Yale UP, 2012). He is currently writing the Very Short Introduction on War Poetry. He is co-editor (with Philip Lancaster) of The Complete Literary Works of Ivor Gurney (OUP, forthcoming).