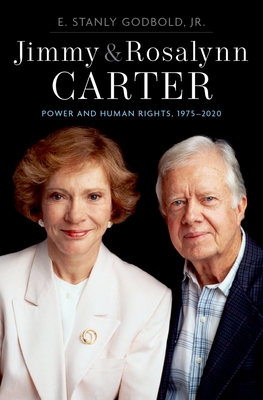 
On Our Shelves Now
The dual biography of the powerful First Couple who attempted to use their presidency to bring peace, human rights, and justice to all peoples of the world and dedicated the remainder of their long lives to making a safer, more caring world. Jimmy and Rosalynn Carter's marriage of over seventy-five years is the longest of any American presidential couple and has been described by them as a full partnership. President Bill Clinton once said that they have changed more lives around the world than any couple in world history. Their lives have been public and private models of honesty and integrity in post-Watergate America. The second of a two-volume biography of Jimmy and Rosalynn Carter by historian E. Stanly Godbold, Jr., this book offers a comprehensive account of the professional and personal lives of the powerful couple who have worked together as reformers in Georgia, President and First Lady of the United States, and founders of the Carter Center to promote international health, conflict resolution, and democracy. It picks up with their departure from the Georgia governor's mansion and their tireless campaign for the Democratic nomination for president in 1976, the first time a Southerner won the White House in over a century. It details the Carter couple's struggle for recognition on a national stage, the challenges of rising energy costs, mounting inflation, geopolitical tensions, and the October Surprise that tainted the 1980 election in which they went down to defeat. During these years, Rosalynn demonstrated that she was a better politician than her husband, offering policy advice,
serving as ambassador extraordinaire, sitting in on Cabinet meetings, and working determinedly to provide care and respect for those suffering from mental illness. Their post-presidential work has been unprecedented on the international stage with Habitat for Humanity and especially their establishment of the Carter Center to wage peace, fight disease, build hope. Carter, after reaching the zenith of his career in negotiating the Camp David Accords of 1978, continued for decades to work for peace in the Middle East. He was awarded the Nobel Peace Prize in 2002, a prize which he quickly said equally belonged to Rosalynn and to the Carter Center. Among the greatest peacemakers of the twentieth century, Jimmy and Rosalynn Carter emerge from this account as inspirational giants in American history and a shining example of the power of a couple in public service.

E. Stanly Godbold, Jr. is Professor Emeritus of History at Mississippi State University and the author of Jimmy and Rosalynn Carter: The Georgia Years, 1924-1974. He served as consultant and commentator for the PBS American Experience documentary on the life of Jimmy Carter. He lives in Oktibbeha County, Mississippi.