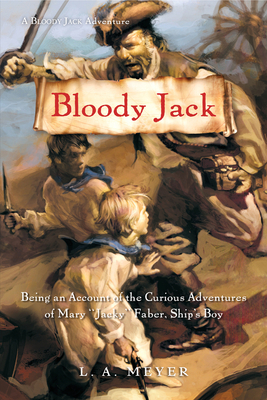 This is book number 1 in the Bloody Jack Adventures series.

Life as a ship's boy aboard HMS Dolphin is a dream come true for Jacky Faber. Gone are the days of scavenging for food and fighting for survival on the streets of eighteenth-century London. Instead, Jacky is becoming a skilled and respected sailor as the crew pursues pirates on the high seas.
There's only one problem: Jacky is a girl. And she will have to use every bit of her spirit, wit, and courage to keep the crew from discovering her secret. This could be the adventure of her life--if only she doesn't get caught. . . .

L. A. Meyer (1942–2014) was the acclaimed writer of the Bloody Jack Adventure series, which follows the exploits of an impetuous heroine who has fought her way up from the squalid streets of London to become an adventurer of the highest order. Mr. Meyer was an art teacher, an illustrator, a designer, a naval officer, and a gallery owner. All of those experiences helped him in the writing of his curious tales of the beloved Jacky Faber. Visit www.jackyfaber.com for more information on the author and his books.

* “Although many fictional heroines have sailed in disguise before Jacky Faber, her coarse, cheeky street voice and naïve but observant take on shipboard life set her apart.” —The Bulletin, starred review