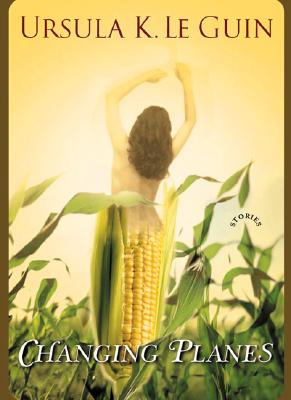 "Then came a child trotting to school with his little backpack. He trotted on all fours, neatly, his hands in leather mitts or boots that protected them from the pavement; he was pale, with small eyes, and a snout, but he was adorable."
--from Changing Planes

The misery of waiting for a connecting flight at an airport leads to the accidental discovery of alighting on other planes--not airplanes but planes of existence. Ursula Le Guin's deadpan premise frames a series of travel accounts by the tourist-narrator who describes bizarre societies and cultures that sometimes mirror our own, and sometimes open puzzling doors into the alien.


Winner of the PEN/Malamud for Short Stories

"{Le Guin] is a splendid short story writer. [Her] fiction, like Borges's, finds its life in the interstices between the borders of speculative fiction and realism."--San Francisco Chronicle Book Review

"The people, places and emotions in Le Guin's stories are typically strange, but her careful, sudden turns toward the familiar. . . seem like revelations of what's really important or fascinating about human life."--Salon