Her Majesty's Royal Coven: A Novel (The HMRC Trilogy #1) (Paperback) 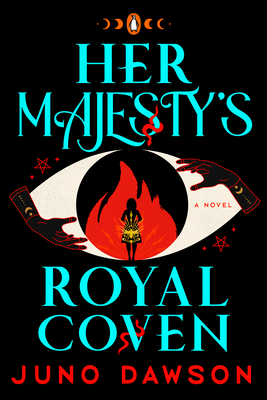 Her Majesty's Royal Coven: A Novel (The HMRC Trilogy #1) (Paperback)

This is book number 1 in the The HMRC Trilogy series.

"Talk about a gut punch of a novel. …A provocative exploration of intersectional feminism, loyalty, gender and transphobia [that] invites readers into an intricately woven web of magic, friendship and power." —The Nerd Daily

A Discovery of Witches meets The Craft in this epic fantasy about a group of childhood friends who are also witches.

If you look hard enough at old photographs, we’re there in the background: healers in the trenches; Suffragettes; Bletchley Park oracles; land girls and resistance fighters. Why is it we help in times of crisis? We have a gift. We are stronger than Mundanes, plain and simple.

At the dawn of their adolescence, on the eve of the summer solstice, four young girls--Helena, Leonie, Niamh and Elle--took the oath to join Her Majesty's Royal Coven, established by Queen Elizabeth I as a covert government department. Now, decades later, the witch community is still reeling from a civil war and Helena is the reigning High Priestess of the organization. Yet Helena is the only one of her friend group still enmeshed in the stale bureaucracy of HMRC. Elle is trying to pretend she's a normal housewife, and Niamh has become a country vet, using her powers to heal sick animals. In what Helena perceives as the deepest betrayal, Leonie has defected to start her own more inclusive and intersectional coven, Diaspora. And now Helena has a bigger problem. A young warlock of extraordinary capabilities has been captured by authorities and seems to threaten the very existence of HMRC. With conflicting beliefs over the best course of action, the four friends must decide where their loyalties lie: with preserving tradition, or doing what is right.

Juno Dawson explores gender and the corrupting nature of power in a delightful and provocative story of magic and matriarchy, friendship and feminism. Dealing with all the aspects of contemporary womanhood, as well as being phenomenally powerful witches, Niamh, Helena, Leonie and Elle may have grown apart but they will always be bound by the sisterhood of  the coven.
Juno Dawson is a bestselling novelist, screenwriter, and journalist. Juno’s books include the global bestsellers, This Book is Gay and Clean. She also writes for television and has multiple shows in development both in the UK and US. An occasional actress and model, Juno appeared on HBO's I May Destroy You. This is her adult debut.
A Most Anticipated Novel of Summer '22 in The Washington Post | Goodreads | LitHub | PopSugar | Parade | Bustle | Tor | Paste | The Nerd Daily | SheReads | Gizmodo | Book Riot | LifeSavvy | Distractify

"There’s so much humor and sadness here, so much tenderness and compassion and a deep love of women. The book draws a gentle thread through the visions we have for ourselves, the memories from which we build our relationships and the ways in which we comprehend the present, and then it pulls that thread taut. Superb and almost unbearably charming, Her Majesty’s Royal Coven is a beautiful exploration of how foundational friendships age, and it expertly launches an exciting new trilogy." --The New York Times Book Review

“Her Majesty’s Royal Coven is a shimmering, irresistible cauldron’s brew of my favorite things: a thrilling, witchy plot; a diverse, compelling, and beautifully drawn cast; complex relationships with real heart; laugh-out-loud banter; and the kind of dazzling magic I wish existed. You won’t be able to put it down.”
—Lana Harper, New York Times bestselling author of Payback’s a Witch

“Juno Dawson is at the top of her game in this vibrant and meticulous take on witchcraft. Her characteristic wit and grit shine through Her Majesty's Royal Coven, which paints a convincing picture of how magic might converge with the modern world.”
--Samantha Shannon, New York Times bestselling author of The Bone Season and The Priory of the Orange Tree

"Talk about a gut punch of a novel. Her Majesty’s Royal Coven is sure to have readers who love witchy stories— and the queerer, the better—salivating from the very first page...this book has more twists, betrayals and drama than a Desperate Housewives episode and I lived for that...A provocative exploration of intersectional feminism, loyalty, gender and transphobia, Dawson’s Her Majesty’s Royal Coven is an immersive story about what it means to be a woman—and a witch—and invites readers into an intricately woven web of magic, friendship and power." -- The Nerd Daily

"Dawson, in an impressive flex, uses the rules of the fantasy genre to make a statement about people of color and LGBTQ individuals and how organizations can exclude and ignore them. Readers who enjoy witches and watching change ripple through a culture will enjoy this series." -- Booklist (starred)

"A femme-forward story of power, morality and fate that is not shy about its politics...Beyond its politics, what especially makes Her Majesty's Royal Coven shine is its impeccable voice. Dawson's conversational, matter-of-fact tone calls to mind writers like Neil Gaiman and Diana Wynne Jones; it's at times funny, at others heartbreaking, but always perfectly calibrated...A thoughtful entry into the witch canon that intrigues and challenges as much as it delights." -- Bookpage

"Juno Dawson has created your new obsession. Her Majesty's Royal Coven is full of her trademark heart and humour, with a delicious slick of darkness. I fell in love with her coven - and I need the next installment now!"
—Kiran Millwood Hargrave, author of The Mercies

"Such a joy to read – the world building is incredible, the writing sophisticated, and the exploration of gender and identity is done with nuance and care. Utterly compelling.”
—Louise O’Neill, author of Asking for It and The Surface Breaks

“The funniest paranormal epic I've ever had the pleasure to read.”
--Nicole Galland, bestselling author of Master of the Revels

"Look if the idea of a story about a group of girls living in an alternate England and working for a centuries-old secret government bureau of witches doesn’t grab you immediately, I don’t know what to tell you. Except that there’s also a witch civil war, an oracle that prophecies a young warlock will bring about genocide, and a group of friends torn about how to stop it." --Paste

"Cleverly constructed…a gradually building layer of political commentary ultimately reveals a complex metaphor for the U.K.’s sociopolitical climate and mainstream transphobia... an exciting new direction for Dawson. Readers will be eager for the next installment."
—Publishers Weekly

"This first adult novel by YA author Dawson (Clean; Meat Market) is a story of feminism, matriarchy, gender roles, and tradition...Readers who love a big fight between good and evil, who enjoy seeing magic in the everyday world, and those who like their heroine’s journeys to include all facets of heartbreak will savor the cut and thrust of this battle." -- Library Journal