The Wasp That Brainwashed the Caterpillar: Evolution's Most Unbelievable Solutions to Life's Biggest Problems (Hardcover) 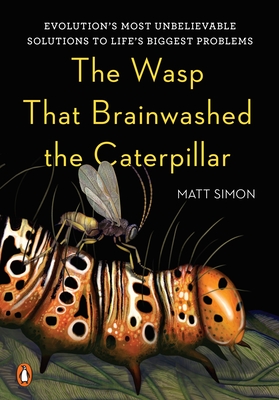 The Wasp That Brainwashed the Caterpillar: Evolution's Most Unbelievable Solutions to Life's Biggest Problems (Hardcover)


On Our Shelves Now
“A bizarre collection of evolution tales . . . the weirder, the better.” —Entertainment Weekly

A fascinating exploration of the awe-inspiring, unsettling ingenuity of evolution from Wired writer Matt Simon, author of Plight of the Living Dead (coming soon from Penguin Books)

On a barren seafloor, the pearlfish swims into the safety of a sea cucumber’s anus. To find a meal, the female bolas spider releases pheromones that mimic a female moth, luring male moths into her sticky lasso web. The Glyptapanteles wasp injects a caterpillar with her young, which feed on the victim, erupt out of it, then mind-control the poor (and somehow still living) schmuck into protecting them from predators.

These are among the curious critters of The Wasp That Brainwashed the Caterpillar, a jaunt through evolution’s most unbelievable, most ingenious solutions to the problems of everyday life, from trying to get laid to finding food. Join Wired science writer Matt Simon as he introduces you to the creatures that have it figured out, the ones that joust with their mustaches or choke sharks to death with snot, all in a wild struggle to survive and, of course, find true love.

“A veritable parade of eccentric animal profiles that make you laugh so hard you won’t even realize you’re learning a thing or two about niche distribution and adaptive camouflage.”
—Wired (“Required Science Reading from 2016”)

“A bizarre collection of evolution tales . . . the weirder, the better.”
—Entertainment Weekly

“A quick, fun read that’s . . . heavy on snark. . . . The book is packed full of fascinating facts that will both impress and creep out.”
—Science News

“An entertaining look at evolution’s frightening billion-year arms race. . . . Simon’s wit, combined with the geniune eccentricity of his subjects, make this a fun and accessible book.”
—Publishers Weekly