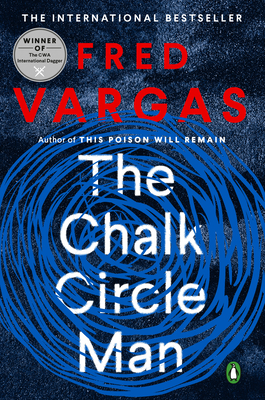 This is book number 1 in the A Commissaire Adamsberg Mystery series.

When blue chalk circles begin to appear on the pavement in neighborhoods around Paris, Commissaire Adamsberg is alone in thinking that they are far from amusing. As he studies each new circle and the increasingly bizarre objects they contain - empty beer cans, four trombones, a pigeon's foot, a doll's head - he senses the cruelty that lies within whoever is responsible. And when a circle is discovered with decidedly less banal contents - a woman with her throat slashed - Adamsberg knows that this is just the beginning.
Fred Vargas is a French medieval historian and archaeologist who has a parallel career as a bestselling crime novelist. She adopted the pseudonym from her twin sister, an artist who works as Jo Vargas—after Ava Gardner’s character in The Barefoot Contessa. She has published ten mysteries, five of which feature Commissaire Adamsberg. Her detective fiction is published in 32 languages.
Praise for Fred Vargas and the Commissaire Adamsberg mysteries

“Vargas writes with the startling imagery and absurdist wit of a latter-day Anouilh, about fey characters who live in a wonderful bohemian world that never was but should have been.” —The New York Times Book Review

“Vargas is, by some distance, the hottest property in contemporary crime fiction.” —The Guardian (London)