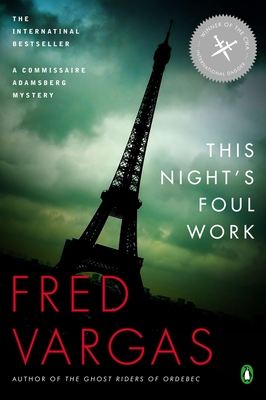 This is book number 3 in the A Commissaire Adamsberg Mystery series.

Awarded the International Dagger by the Crime Writers' Association four times, Fred Vargas has earned a reputation in Europe as a mystery author of the first order. In This Night's Foul Work, the intuitive Commissaire Adamsberg teams up with Dr. Ariane, a pathologist with whom he crossed paths twenty years ago, to unravel a beguiling mystery that begins with the discovery of two bodies in Paris's Porte de la Chapelle. Adamsberg believes it may be the work of a killer with split personalities, who is choosing his or her victims very carefully. As other murders begin to surface, Adamsberg must move quickly in order to stop the "Angel of Death" from killing again.
Fred Vargas is a French medieval historian and archaeologist who has a parallel career as a bestselling crime novelist. She adopted the pseudonym from her twin sister, an artist who works as Jo Vargas—after Ava Gardner’s character in The Barefoot Contessa. She has published ten mysteries, five of which feature Commissaire Adamsberg. Her detective fiction is published in 32 languages.
“Adamsberg is a terrific creation and his team of misfits a joy to watch in action.”
—Peter Robinson, New York Times bestselling author of the Inspector Banks series

“Vargas writes with the startling imagery and absurdist wit of a latter-day Anouilh, about fey characters who live in a wonderful bohemian world that never was but should have been.”
—The New York Times Book Review

“Real vintage Vargas: playful, thought-provoking, a total delight. And beautifully translated. Adamsberg is one of my favourite detectives.”
—Ann Cleeves, author of the Shetland Island Mysteries

“It's a full, rich and strange plate.”
—Seattle Times

“[A] high degree of intelligence, sophistication and perversity informs [Vargas’] fiction…I continue to be delighted by the workings of [her] imagination. It’s a tangled web she weaves, and a hard one to escape.”
—The Washington Post