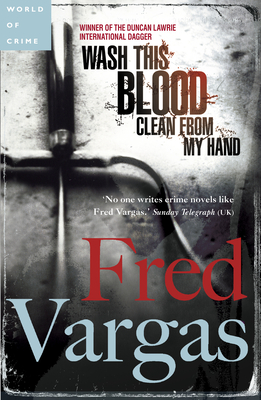 This is book number 2 in the A Commissaire Adamsberg Mystery series.

Three wounds in a perfectly straight line was the bloody signature that marked victims from every corner of France who had been murdered over the course of thirty years. Commissaire Jean-Baptiste Adamsberg, the chief of police in Paris's 7th Arrondissement, is deeply and personally familiar with the case, and though others were always framed and convicted for these crimes, including his own brother, the Commissaire knows the true identity of the killer—and knows that the murderer died in 1987. All the more disturbing, then, is Adamsberg's discovery one morning of a fresh murder with exactly the same profile...
Fred Vargas is a French medieval historian and archaeologist who has a parallel career as a bestselling crime novelist. She adopted the pseudonym from her twin sister, an artist who works as Jo Vargas—after Ava Gardner’s character in The Barefoot Contessa. She has published ten mysteries, five of which feature Commissaire Adamsberg. Her detective fiction is published in 32 languages.
Praise for Fred Vargas and the Commissaire Adamsberg mysteries

“Vargas writes with the startling imagery and absurdist wit of a latter-day Anouilh, about fey characters who live in a wonderful bohemian world that never was but should have been.” —The New York Times Book Review

“Vargas is, by some distance, the hottest property in contemporary crime fiction.” —The Guardian (London)