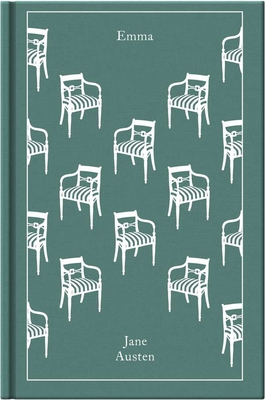 Part of Penguin's beautiful hardback Clothbound Classics series, designed by the award-winning Coralie Bickford-Smith, these delectable and collectible editions are bound in high-quality colourful, tactile cloth with foil stamped into the design. Beautiful, clever, rich - and single - Emma Woodhouse is perfectly content with her life and sees no need for either love or marriage. Nothing, however, delights her more than interfering in the romantic lives of others. But when she ignores the warnings of her good friend Mr Knightley and attempts to arrange a suitable match for her protégée Harriet Smith, her carefully laid plans soon unravel and have consequences that she never expected. With its imperfect but charming heroine and its witty and subtle exploration of relationships, Emma is often seen as Jane Austen's most flawless work.

Jane Austen (1775-1817) was modest about her own genius but is one of English literature's greatest and most admired writers. She is the author of Sense & Sensibility, Pride & Prejudice, Emma, Mansfield Park, Northanger Abbey, and Persuasion.

"Jane Austen is my favorite author! ... Shut up in measureless content, I greet her by the name of most kind hostess, while criticism slumbers." —EM Forster