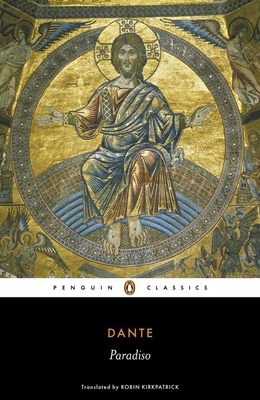 This is book number 3 in the Divine Comedy series.

The radiant climax to Dante's awe-inspiring epic, in a definitive new translation

Having plunged to the utmost depths of Hell and climbed Mount Purgatory in the first two parts of The Divine Comedy, Dante now ascends to Heaven, guided by his beloved Beatrice, to continue his search for God. As he progresses through the spheres of Paradise, he grows ever closer to experiencing divine love in the overwhelming presence of the deity. Examining eternal questions of faith, desire, and enlightenment, Dante exercised all of his learning and wit, wrath and tenderness in his creation of one of the greatest of all Christian allegories. This edition prints Robin Kirkpatrick's impressive new translation alongside Dante's original Italian.

For more than seventy years, Penguin has been the leading publisher of classic literature in the English-speaking world. With more than 1,700 titles, Penguin Classics represents a global bookshelf of the best works throughout history and across genres and disciplines. Readers trust the series to provide authoritative texts enhanced by introductions and notes by distinguished scholars and contemporary authors, as well as up-to-date translations by award-winning translators.
Dante Alighieri was born in 1265. Considered Italy's greatest poet, this scion of a Florentine family mastered in the art of lyric poetry at an early age. His first major work is La Vita Nuova (1292) which is a tribute to Beatrice Portinari, the great love of his life. Married to Gemma Donatic, Dante's political activism resulted in his being exiled from Florence to eventually settle in Ravenna. It is believed that The Divine Comedy—comprised of three canticles, The Inferno, The Purgatorio, and The Paradiso—was written between 1308 and 1320. Dante Alighieri died in 1321.

Robin Kirkpatrick is a widely published Dante scholar. He is fellow of Robinson College and professor of Italian and English literature at Cambridge University.

“Kirkpatrick brings a more nuanced sense of the Italian and a more mediated appreciation of the poem's construction than nearly all of his competitors.” —The Times (London)

“We gain much from Kirkpatrick’s fidelity to syntax and nuance. . . . His introduction . . . tells you, very readable indeed, pretty much all you need for a heightened appreciation of the work.”
—The Guardian

“Likely to be the best modern version of Dante . . . The perfect balance of tightness and colloquialism.” —Bernard O’Donoghue

“This version is the first to bring together poetry and scholarship in the very body of the translation—a deeply informed version of Dante that is also a pleasure to read.” —David Wallace, University of Pennsylvania