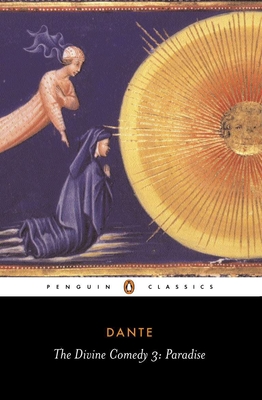 To the consternation of his more academic admirers, who believed Latin to be the only proper language for dignified verse, Dante wrote his Comedy in colloquial Italian, wanting it to be a poem for the common reader. Taking two threads of a story that everybody knew and loved – the story of a vision of Hell, Purgatory and Paradise, and the story of the lover who has to brave the Underworld to find his lost lady – he combined them into a great allegory of the soul’s search for God. He made it swift, exciting and topical, lavishing upon it all his learning and wit, all his tenderness, humour and enthusiasm, and all his poetry. In Paradise, Dante journeys through the encircling spheres of heaven towards God.

Dante Alighieri was born in 1265. Considered Italy's greatest poet, this scion of a Florentine family mastered in the art of lyric poetry at an early age. His first major work is La Vita Nuova (1292) which is a tribute to Beatrice Portinari, the great love of his life. Married to Gemma Donatic, Dante's political activism resulted in his being exiled from Florence to eventually settle in Ravenna. It is believed that The Divine Comedy—comprised of three canticles, The Inferno, The Purgatorio, and The Paradiso—was written between 1308 and 1320. Dante Alighieri died in 1321.

“Exactly what we have waited for these years, a Dante with clarity, eloquence, terror, and profoundly moving depths.” –Robert Fagles, Princeton University

“A marvel of fidelity to the original, of sobriety, and truly, of inspired poetry.” –Henri Peyre, Yale University