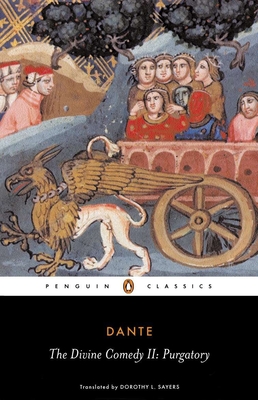 This is book number 2 in the Divine Comedy series.

Beginning with Dante's liberation from Hell, Purgatory relates his ascent, accompanied by Virgil, of the Mount of Purgatory - a mountain of nine levels, formed from rock forced upwards when God threw Satan into depths of the earth. As he travels through the first seven levels, Dante observes the sinners who are waiting for their release into Paradise, and through these encounters he is himself transformed into a stronger and better man. For it is only when he has learned from each of these levels that he can ascend to the gateway to Heaven: the Garden of Eden. The second part of one of the greatest epic poems, Purgatory is an enthralling Christian allegory of sin, redemption and ultimate enlightenment.

For more than seventy years, Penguin has been the leading publisher of classic literature in the English-speaking world. With more than 1,700 titles, Penguin Classics represents a global bookshelf of the best works throughout history and across genres and disciplines. Readers trust the series to provide authoritative texts enhanced by introductions and notes by distinguished scholars and contemporary authors, as well as up-to-date translations by award-winning translators.
Dante Alighieri was born in 1265. Considered Italy's greatest poet, this scion of a Florentine family mastered in the art of lyric poetry at an early age. His first major work is La Vita Nuova (1292) which is a tribute to Beatrice Portinari, the great love of his life. Married to Gemma Donatic, Dante's political activism resulted in his being exiled from Florence to eventually settle in Ravenna. It is believed that The Divine Comedy—comprised of three canticles, The Inferno, The Purgatorio, and The Paradiso—was written between 1308 and 1320. Dante Alighieri died in 1321.
“The English Dante of choice.” –Hugh Kenner

“Exactly what we have waited for these years, a Dante with clarity, eloquence, terror, and profoundly moving depths.” –Robert Fagles, Princeton University

“A marvel of fidelity to the original, of sobriety, and truly, of inspired poetry.” –Henri Peyre, Yale University