Rise of the School for Good and Evil (Hardcover) 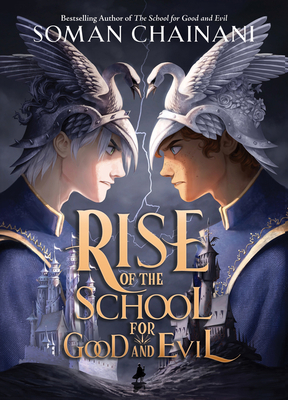 Rise of the School for Good and Evil (Hardcover)

The battle between Good and Evil begins.

Together they watch over the Endless Woods.

Together they choose the students for the School for Good and Evil.

Together they train them, teach them, prepare them for their fate.

Something that will change everything and everyone.

Who will rule the School?

The journey starts here. Every step is filled with magic, surprises, and daring deeds that test courage, loyalty, and who you really are. But they only lead you to the very beginning of the adventures that are THE SCHOOL FOR GOOD AND EVIL.

Soman Chainani is the New York Times bestselling author of the School for Good and Evil series. The fairy-tale saga has sold over 3 million copies, been translated into 31 languages, and will soon be a major motion picture from Netflix, which Soman will executive produce. His most recent book, Beasts and Beauty: Dangerous Tales, was also an instant New York Times bestseller and is in development to be a television series from Sony 3000.

Soman is a graduate of Harvard University and received his MFA in film from Columbia University. Every year, he visits schools around the world to speak to kids and share his secret: that reading is the path to a better life.

You can visit Soman at www.somanchainani.com.

In this provocative prequel to the School for Good and Evil series, Chainani expands on the world’s mythos by returning to the institution’s earliest days. While this tale is enriched by previous series knowledge, and fans will enjoy watching the narrative foreshadow events to come, it is still accessible to newcomers. An episodic, adventurous fantasy offering. — Publishers Weekly

Action-packed and full of adventure, this series prequel is a summer hit. — School Library Journal