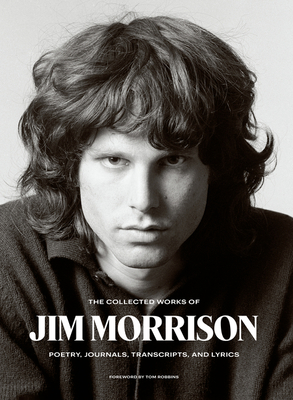 The definitive anthology of Jim Morrison's writings with rare photographs and numerous handwritten excerpts of unpublished and published poetry and lyrics from his 28 privately held notebooks.

You can also hear Jim Morrison’s final poetry recording, now available for the first time, on the CD or digital audio edition of this book, at the Village Recorder in West Los Angeles on his twenty-seventh birthday, December 8, 1970. The audio book also includes performances by Patti Smith, Oliver Ray, Liz Phair, Tom Robbins, and others reading Morrison’s work.

Created in collaboration with Jim Morrison’s estate and inspired by a posthumously discovered list entitled “Plan for Book,” The Collected Works of Jim Morrison is an almost 600-page anthology of the writings of the late poet and iconic Doors’ front man. This landmark publication is the definitive opus of Morrison’s creative output—and the book he intended to publish. Throughout, a compelling mix of 160 visual components accompanies the text, which includes numerous excerpts from his 28 privately held notebooks—all written in his own hand and published here for the first time—as well as an array of personal images and commentary on the work by Morrison himself.

This oversized, beautifully produced collectible volume contains a wealth of new material—poetry, writings, lyrics, and audio transcripts of Morrison reading his work. Not only the most comprehensive book of Morrison’s work ever published, it is immersive, giving readers insight to the creative process of and offering access to the musings and observations of an artist whom the poet Michael McClure called “one of the finest, clearest spirits of our times.”

James Douglas Morrison (1943-1971) was a poet, filmmaker, screenwriter, and the lead singer of as well as the lyricist and a composer for The Doors. Prior to his death, Morrison self-published three limited-edition volumes of his poetry: The Lords/Notes on Vision (1969), The New Creatures (1969), and An American Prayer (1970). Simon & Schuster published the combined The Lords and the New Creatures in 1970. Posthumous editions of Morrison’s writings include Wilderness: The Lost Writings of Jim Morrison, Volume I (1988) and The American Night: The Lost Writings of Jim Morrison, Volume II (1990).

The Collected Works of Jim Morrison is a revelation for fans, particularly those eager to look beyond the Lizard King Lothario persona. — People

As thought-provoking as it is provocative and, beyond the priapic bluster, Morrison is ­elegiac, too. — inews.co.uk

Morrison wrote that 'we had a great visitation of energy,' proclaimed that 'the ancient ones' time has come again,' urged readers to 'enter again the sweet forest/enter the hot dream.' While he deliberately drove down toad-squirmy backroads of primal terror, ecstasy was often naked in the shotgun seat, spinning jeweled pinwheels, peeling a peach. — Tom Robbins, from the foreword, “Fireflies of the Apocalypse"