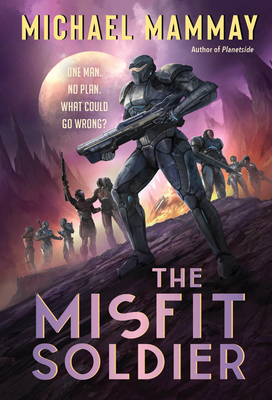 We are excited to announce a pre-order campaign for Michael Mammay's new stand alone sci-fi novel The Misfit Soldier.

Michael will be signing and personalizing all pre-orders! Go ahead and pop a copy in your cart and at checkout leave us a comment with how you would like your books personalized and we will have them ready on pub day.

Ocean’s Eleven meets John Scalzi in this funny, action-filled, stand-alone sci-fi adventure from the author of Planetside, in which a small team of misfit soldiers takes on a mission that could change the entire galaxy.

Sergeant Gastovsky—Gas to everyone but his superior officers—never wanted to be a soldier. Far from it. But when a con goes wrong and he needs a place to lay low for a while, he finds himself wearing the power armor of the augmented infantry.

After three years on a six-year contract, Gas has found his groove running low-level cons and various illegal activities that make him good money on the side. He’s the guy who can get you what you need. But he’s always had his eye out for a big score—the one that might set him up for life after the military.

When one of his soldiers is left behind after a seemingly pointless battle, Gas sees his chance. He assembles a team of misfit soldiers that would push the term “ragtag” to its limits for a big con that leads them on a daring behind-the-lines mission, pitting him not only against enemy soldiers but against the top brass of his own organization.

If he pulls this off, not only will he save his squadmate, he might just become the legend he’s always considered himself. He might also change the way the entire galaxy looks at this war. But for any of that to happen, he has to live through this insane plan.

"Gas is a snarky, sharp-witted protagonist whose reckless decisions are balanced by bold confidence and luck — and a lively group cast of supporting characters who make up his crew. In a story packed with quippy dialogue and cinematic action, Mammay deftly blends military sci-fi with edge-of-your-seat heist elements." — Ren Hutchings, author of UNDER FORTUNATE STARS

THE MISFIT SOLDIER is a goddamned delight. Mammay masterfully blends heist and military SF in the schemes of a sergeant--bent on rescue, with a side of smuggling--whose best weapon is his wit, not his power armor. Han Solo meets Halo meets Ocean's Eleven, and more fun than all three. — K. Eason, author of Nightwatch on the Hinterlands

"The Misfit Soldier is an action-packed, engrossing read that has just enough military sci-fi trappings to dress the set, but the far more interesting action is what takes place between the characters on that set as they seek out a place to survive. You don’t have to be a fan of space marines to enjoy this book (though their power armor is pretty cool), and Mammay has shown obvious growth as an author, with this being his most intriguing work yet." — Lightspeed Magazine

"THE MISFIT SOLDIER is Starship Troopers meets Saving Private Ryan with a dash of Ocean’s Eleven. A fun, fast-paced Military-SF space adventure. As with all of his books, I highly recommend." — Zac Topping

"Highly recommended for readers who like their heroes cynical, their mystery twisted, and their sf thought-provoking.”  — Library Journal (starred review) on Colonyside

“This was a brisk, entertaining novel. [...] I was reminded a bit of some of John Scalzi’s Old Man’s War novels.” — SFFWorld on Planetside

“A tough, authentic-feeling story that starts out fast and accelerates from there.” — Jack Campbell, author of Ascendant on Planetside

“Not just for military SF fans—although military SF fans will love it—Planetside is an amazing debut novel, and I’m looking forward to what Mammay writes next.”  — >anya Huff, author of the Confederation and Peacekeeper series

“Planetside is a smart and fast-paced blend of mystery and boots-in-the-dirt military SF that reads like a high-speed collision between Courage Under Fire and Heart of Darkness.”  — Marko Kloos, bestselling author of the Frontline series