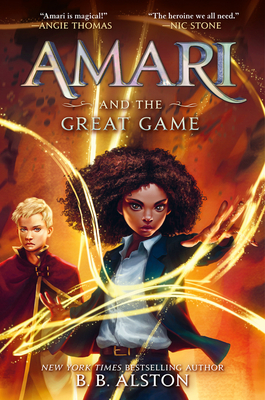 This is book number 2 in the Supernatural Investigations series.

“Amari returns with higher stakes and even more magic. Reeling from the events of the first book, Amari has more questions than answers and a new mystery to solve before everyone goes to war. Alston continues the adventure with mastery.”
— Becca Ellsworth, Rediscovered Books, Boise, ID

Sequel to the New York Times bestseller Amari and the Night Brothers!

Artemis Fowl meets Men in Black in this magical second book in the New York Times and Indie bestselling Supernatural Investigations trilogy—perfect for fans of Tristan Strong Punches a Hole in the Sky, the Percy Jackson series, and Nevermoor.

After finding her brother and saving the entire supernatural world, Amari Peters is convinced her first full summer as a Junior Agent will be a breeze.

But between the fearsome new Head Minister’s strict anti-magician agenda, fierce Junior Agent rivalries, and her brother Quinton’s curse steadily worsening, Amari’s plate is full. So when the secretive League of Magicians offers her a chance to stand up for magiciankind as its new leader, she declines. She’s got enough to worry about!

But her refusal allows someone else to step forward, a magician with dangerous plans for the League. This challenge sparks the start of the Great Game, a competition to decide who will become the Night Brothers’ successor and determine the future of magiciankind.

The Great Game is both mysterious and deadly, but among the winner’s magical rewards is Quinton’s last hope—so how can Amari refuse?

B. B. Alston lives in Lexington, South Carolina. His debut novel, Amari and the Night Brothers, is a #1 Kids’ Indie Next pick and the winner of Barnes & Noble’s inaugural Children’s and YA Book Award as well as a New York Times and indie bestseller. When not writing, he can be found eating too many sweets and exploring country roads to see where they lead. Visit him online at www.bbalston.com.

"Fans of the first book will jump at the opportunity to immerse themselves once again in the delights and surprises of this magical world, filled with equal parts wonder and suspense." — School Library Journal

Praise for AMARI AND THE NIGHT BROTHERS: “This series debut is sure to be a hit with late elementary students and middle graders who are fans of “Harry Potter,” “Percy Jackson,” and the Men in Black movies….An excellent middle grade fantasy that will attract an immediate fan base and leave kids eager for more.” — School Library Journal (starred review)

Praise for AMARI AND THE NIGHT BROTHERS: “In this thrilling debut, Alston thrusts his intrepid heroine into a setting packed with magic, mythical creatures, and danger. Amari, a Black girl with limited means, confronts privilege and prejudice even while delving into a world of wonder, humor, and adventure, making this a sure-to-please winner.” — Publishers Weekly (starred review)

Praise for AMARI AND THE NIGHT BROTHERS: “Fast-paced adventure and cutthroat pre-adolescent contempt make for a delightfully challenging journey here, particularly considering the ways that Alston frames Amari’s racial and economic experiences as a Black girl as the root of her strong-willed nature and spirit of integrity. It’s a good thing this book is the first of a series, because readers will be sorely disappointed when it ends.” — ALA Booklist (starred review)

Praise for AMARI AND THE NIGHT BROTHERS: “A breath of fresh air in the normal-kid-finds-out-they’re-magic genre, with Amari’s snappy, no-nonsense narration, a mix of new, bizarre supernatural creatures and classic vampires and witches, and rich world building that reads as both familiar and fantastic…. Readers will no doubt cross their fingers for more of Amari’s adventures.” — Bulletin of the Center for Children’s Books

Praise for AMARI AND THE NIGHT BROTHERS: “The story introduces a world of enchantment, danger, excitement, and humor. While many parallels can be drawn between the protagonist and a certain boy wizard, readers will root for Amari’s own unique determination and wit.” — Horn Book Magazine

“An enchanting fantasy adventure filled with heart and soul. Amari is magical!” — Angie Thomas, #1 New York Times bestselling author of THE HATE U GIVE

“As a former black girl misfit who wanted nothing more in the world than to be magical, this book is a song to my soul. Amari is the heroine we all need.” — Nic Stone, #1 New York Times bestselling author of DEAR MARTIN

“Amari and the Night Brothers gives an electrifying jolt to middle-grade fantasy, that takes the ingredients we know and love--strong-willed, relatable protagonist, a worthy quest, and a thrilling magical portal--and makes them fresh and new. From the first pages, Amari is at once self-possessed and an underdog, battling racism, bias and poverty, all later mirrored in her efforts to find her brother inside the fantastical labyrinth of the Bureau of Supernatural Affairs. Funny, fast-paced, and ultimately moving, B.B. Alston's debut is a rousing success and kicks off a series that will truly stand out from the rest!” — Soman Chainani, author of the bestselling The School for Good and Evil series

"The surprises and story never slow down for a minute in this magical, astonishing world, with a heroine who’s like Buffy meets Meg Murry multiplied by Shuri to the power of awesome. I want to live in Amari’s world and watch her save it (or have her come here and save ours!)!" — Tui Sutherland, bestselling author of the Wings of Fire series