My Weirder-est School #8: Miss Aker Is a Maker! (Library Binding) 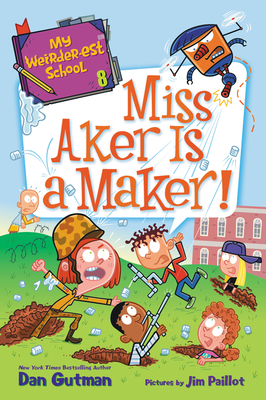 This is book number 8 in the My Weirder-est School series.

With more than 29 million books sold, the My Weird School series really gets kids reading! In this eighth book in the My Weirder-est School series, A.J. and his friends join the Maker movement! Who’s ready to tinker, collaborate, and be inspired?

Principal Klutz has invited a special guest to Ella Mentry School. Her name is Miss Aker, and she’s going to show A.J. and his friends how to create cool things out of materials like balloons, straws, and even Popsicle sticks!

But what happens when they make a robot so smart, it plans to rule the world? Can anyone stop it?!

Perfect for reluctant readers and all kids hungry for funny school stories, Dan Gutman’s hugely popular My Weird School chapter book series has something for everyone. Don’t miss the hilarious adventures of A.J. and the gang!