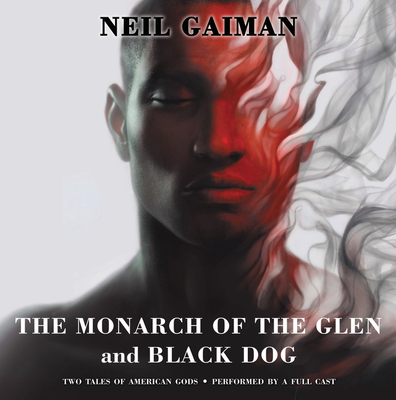 Welcome to the world of American Gods as you’ve never heard it before . . .

First published in 2001, Neil Gaiman’s masterpiece, American Gods, is the New York Times bestselling novel that told the story of Shadow, an ex-con whose life took an unexpected turn when he became bodyguard, driver, and errand boy for the enigmatic trickster and rogue, “Mr. Wednesday.”

But Shadow’s story did not end with the last scene of American Gods. In “The Monarch of the Glen,” we follow Shadow to an isolated castle in Scotland, where he becomes embroiled in an ongoing battle between men and monsters. And in “Black Dog,” Shadow travels to a small village in England where he is befriended by a local couple with a dark past . . . and its ghosts.

Now, for the first time ever – and available exclusively on vinyl – these masterpieces of imaginative genius are performed by an all-star cast helmed by Sir Derek Jacobi and featuring the return of Daniel Oreskes as Shadow and Maggi-Meg Reed as Bast. Accompanied by the talented voices of Michael Emerson, Marc Thompson, Peter Forbes, Katherine Kingsley, David Rintoul, Siobhan Redmon, Daniel Weyman, and Adjoa Andoh, this superb recording is a true audiophile’s delight.

These brand-new recordings come with the MP3 download of the full cast recording of American Gods: The Tenth Anniversary Edition via Libro.fm. At last, all of Shadow’s adventures in one place!

This vinyl boxset is perfectly timed for the 20th anniversary of American Gods and is a true collector’s item for fans. With a limited print run of 2,500 each slipcase is numbered. The slipcase and five LP jackets all feature stunning original artwork by Miranda Meeks. As sure to look as stunning as it sounds!

Derek Jacobi is a celebrated actor, having won a Tony® Award for Much Ado About Nothing, and an Emmy® award for Graham Greene's The Tenth Man. Jacobi is perhaps best known for his brilliant portrayal of the Emperor in the miniseries, I Claudius.