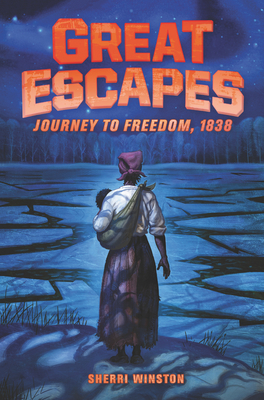 Are you ready for some of the most exciting, death-defying escape stories ever told? Perfect for fans of the I Survived series, the second installment in a brand-new, edge-of-your-seat series based on real events!

Winter 1838—Kentucky. Determined to save her toddler son from being sold as a slave, the woman who became known as Eliza Harris trekked through the forest, in the dark of night with wild animals on her heels. Her goal: cross the Ohio River, the boundary between the North and the South, between slavery and freedom.

Although the journey would be perilous, Eliza looked out at the treacherous frozen waters and quickly decided she couldn’t let fear stop her, especially when a new life—a free life—waited just on the other side.

From reluctant reader to total bookworm, each book in this page-turning series—featuring fascinating bonus content and captivating illustrations—will leave you excited for the next adventure!

Sherri Winston spent most of her childhood making up stories and reading books. She is proud to be an author for young readers. She currently lives in Central Florida with her two daughters, multiple cats, two turtles, and a happy little doggy.

James Bernardin is a versatile and prolific illustrator of many acclaimed books for children. He has illustrated Laura Numeroff's Would I Trade My Parents?, Eve Bunting's Too Many Monsters, and Candy Chand's The Twelve Prayers of Christmas. He has also created artwork for numerous book covers, including Mary Pope Osborne's Tales from the Odyssey series.

James lives on Bainbridge Island in Washington State with his wife, Lisa, and two sons, Wyeth and Bryson.