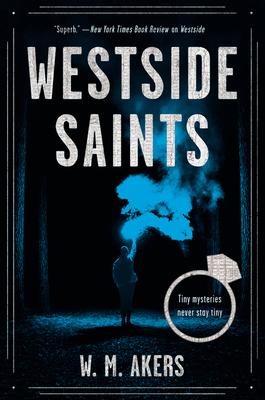 Return to a twisted version of Jazz Age New York in this follow up to the critically acclaimed fantasy Westside, as relentless sleuth Gilda Carr’s pursuit of tiny mysteries drags her into a case that will rewrite everything she knows about her past.

Six months ago, the ruined Westside of Manhattan erupted into civil war, and private detective Gilda Carr nearly died to save her city. In 1922, winter has hit hard, and the desolate Lower West is frozen solid. Like the other lost souls who wander these overgrown streets, Gilda is weary, cold, and desperate for hope. She finds a mystery instead.

Hired by a family of eccentric street preachers to recover a lost saint’s finger, Gilda is tempted by their promise of “electric resurrection,” when the Westside’s countless dead will return to life. To a detective this cynical, faith is a weakness, and she is fighting the urge to believe in miracles when her long dead mother, Mary Fall, walks through the parlor door.

Stricken with amnesia, Mary remembers nothing of her daughter or her death, but that doesn’t stop her from being as infuriatingly pushy as Gilda herself. As her mother threatens to drive her insane, Gilda keeps their relationship a secret so that they can work together to investigate what brought Mary back to life. The search will force Gilda to reckon with the nature of death, family, and the uncomfortable fact that her mother was not just a saint, but a human being.

W.M. Akers is a novelist, playwright, and game designer. He is the author of the mystery novels Critical Hit, Westside, and Westside Saints; the creator of the bestselling games Deadball: Baseball With Dice and Comrades: A Revolutionary RPG; and the curator of the history newsletter Strange Times. He lives in Philadelphia, but hasn’t traded in his Mets cap yet. Learn more about his work at wmakers.net.

“The Alienist meets The City & The City in this brilliant debut that mixes fantasy and mystery. Gilda Carr’s ‘tiny mysteries’ pack a giant punch.”
—  David Morrell, New York Times bestselling author of Murder as a Fine Art, on Westside

“A fascinating, delightfully twisty mystery. Westside crosses prohibition-era New York with the dark strangeness of Neverwhere. Fierce young detective Gilda Carr makes you believe that small mysteries hold the answers to everything.”
— Erika Swyler, bestselling author of The Book of Speculation and Light from Other Stars, on Westside

“Full of action and colorful characters, this genre mash-up is expertly done and will be enjoyed by fans of mysteries and fantasy alike.”
— Booklist (starred review) on Westside