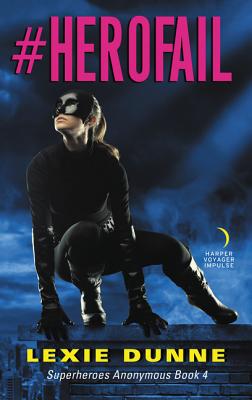 This is book number 4 in the Superheroes Anonymous series.

Gail "Hostage Girl" Godwin is back and ready to save the day—sort of—in #Herofail, the fourth book in Lexie Dunne's action-packed Superheroes Anonymous series!

She’s been in trouble before, but Gail Godwin has really stepped in it now.

Once a favorite plaything of supervillains everywhere, the former Hostage Girl has settled into interning for the world’s most famous superhero: the Raptor. Sure, fetching coffee comes with a side of fighting crime and night patrol hours are horrible, but that’s fine. Gail likes her boss, she likes her job, and things with her boyfriend couldn’t be better.

So of course disaster strikes the first time she dons the armor. One ill-timed photo later, she’s trending on every platform (and not in a good way), the Raptor is out of commission, and thousands are in danger. And when two of the worst supervillains in history battle for Top Evildoer of All Time, Gail’s stuck in the spotlight without a mentor or a plan. It’s up to her to uncover old secrets, fight the bad guys, and save the world (again).

Provided she doesn’t fall flat on her ass in the process.