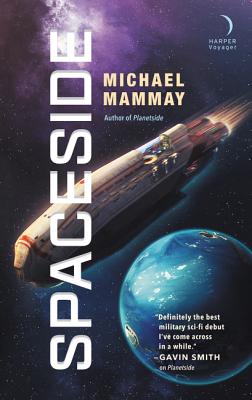 This is book number 2 in the Planetside series.

From the author of Planetside, a Best Book of 2018 (Library Journal)

Following his mission on Cappa, Colonel Carl Butler returns to a mixed reception. To some he is a do-or-die war hero. To the other half of the galaxy he’s a pariah. Forced into retirement, he has resettled on Talca Four where he’s now Deputy VP of Corporate Security, protecting a high-tech military company on the corporate battlefield—at least, that’s what the job description says. Really, he’s just there to impress clients and investors. It’s all relatively low risk—until he’s entrusted with new orders. A breach of a competitor’s computer network has Butler’s superiors feeling every bit as vulnerable. They need Butler to find who did it, how, and why no one’s taken credit for the ingenious attack.

As accustomed as Butler is to the reality of wargames—virtual and otherwise—this one screams something louder than a simple hack. Because no sooner does he start digging when his first contact is murdered, the death somehow kept secret from the media. As a prime suspect, he can’t shake the sensation he’s being watched…or finally succumbing to the stress of his past. Paranoid delusion or dangerous reality, Butler might be onto something much deeper than anyone imagined. But that’s where Butler thrives.

If he hasn’t signed his own death warrant.

“Highly recommended for military sf lovers, who will savor his perspective and probably want to buy the man a drink.” — Library Journal (starred review)

“Spaceside is a worthy sequel to Planetside and Mammay once again successfully delivered another highly entertaining page-turner. The cleverly mixed mystery and military sci-fi element made this relatively small book packed with a strong impact, and I highly recommend it to readers who are looking for a fast-paced mystery/sci-fi read.” — Novel Notions

“This is another wonderfully addictive, fast-moving book from Michael Mammay. Corporate intrigue, interplanetary politics and military action are blended into a cohesive whole that is both satisfying and great fun.” — SFCrowsnest

“The book was an enjoyable read and would likely sit well with any fan of military SF looking for an action-thriller to browse while lying in the sun at the beach.” — Chris Kluwe for Lightspeed Magazine

“Planetside, the debut novel by Michael Mammay, is an easy book to love. [...] a page-turner and an extremely satisfying read.” — Washington Independent Review of Books

“PLANETSIDE is a smart and fast-paced blend of mystery and boots-in-the-dirt military SF that reads like a high-speed collision between Courage Under Fire and Heart of Darkness.” — Marko Kloos, bestselling author of the Frontline series

“Not just for military SF fans—although military SF fans will love it—Planetside is an amazing debut novel, and I’m looking forward to what Mammay writes next.” — Tanya Huff, author of the Confederation and Peacekeeper series

“In Planetside Mammay mixes a brevity of prose with feeling of authenticity that would be remarkable in many experienced authors, let alone in a debut novel. Definitely the best military sci-fi debut I’ve come across in a while.” — Gavin Smith, author of Bastard Legion and Age of Scorpio

“If you like military SF you’ll love this or if you like SF mysteries or probably just SF in general. It’s a highly impressive first novel that left a real impact.” — SFCrowsnest

“If Cold Welcome and Old Man’s War had a love child you might get something like PLANETSIDE. And it would be, and is, pretty damn awesome. I would say it’s awesome for a debut novel, but that isn’t nearly praise enough. It’s just plain awesome.” — Reading Reality

“A tough, authentic-feeling story that starts out fast and accelerates from there.”

“A fast-paced tale of military investigation that reads like a blend of Jerry Pournelle and NCIS. Michael Mammay brings an exciting and authentic voice of experience to military science fiction.”

“This was a brisk, entertaining novel. [...] I was reminded a bit of some of John Scalzi’s Old Man’s War novels.” — SFFWorld