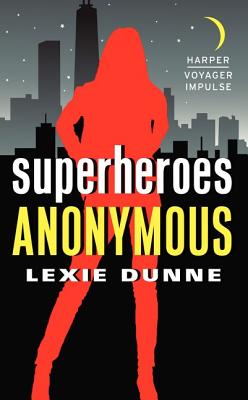 This is book number 1 in the Superheroes Anonymous series.

Everybody in Chicago has a "superhero sighting" story. So when a villain attacks editorial assistant Gail Godwin and she's rescued by superhero Blaze, it's a great story, and nothing more. Until it happens again. And again. Now the media has dubbed her Hostage Girl, nobody remembers her real name, and people are convinced that Blaze is just her boyfriend, Jeremy, in disguise.

Gail's not so sure. All she knows is that when both Jeremy and Blaze leave town in the same week, she's probably doomed. Who will save her now?

Yet, miraculously, the villains lose interest. Gail is able to return to her life … until she wakes up strapped to a metal table by a mad scientist who hasn't read the news. After escaping—now more than human herself—she's drawn into a secret underground world of superheroes. She'll have to come to terms with her powers (and weaknesses) to make it in the new society, and it's not easy. After all, there's a new villain on the rise, and she has her sights set on the one and only Hostage Girl.