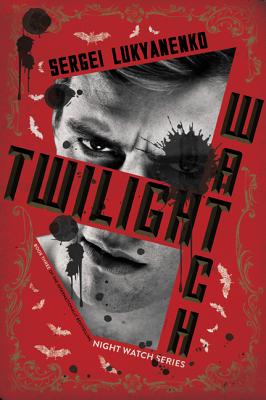 This is book number 3 in the Night Watch series.

The third book in the internationally bestselling Night Watch series.

Set in contemporary Moscow, the Night Watch series tells the story of the Others, an ancient race of magicians, shape-shifters, vampires, and other supernatural beings that live among us, and swear allegiance to either the powers of Darkness, or the forces of Light. For the past 1000 years, the two sides have been locked in an uneasy truce, keeping their powers in balance as each side secretly plots to take the advantage for themselves.

Twilight Watch returns to the perspective of Anton Gorodetsky, now married, with a daughter who has limitless potential as a Light Other, and an important destiny. When an ancient book of spells with the power to turn ordinary humans into Others, permanently destroying the balance between Light and Darkness, falls into the wrong hands, Anton and the Night Watch must join forces with the Day Watch to find the culprit and prevent total war. As Anton gets closer to discovering the true nature of the Others, he begins to question how good the Light Others truly are, and how similar to the Dark Others they may be after all.

Sergei Lukyanenko was born in Kazakhstan and educated as a psychiatrist. He began publishing science fiction in the 1980s and has published more than twenty-five books. He lives in Moscow with his wife and son.