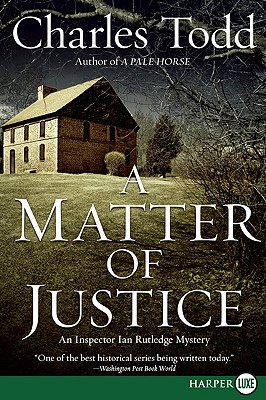 This is book number 11 in the Inspector Ian Rutledge Mysteries series.

“Charles Todd hasn’t made a misstep yet in his elegant series featuring Scotland Yard detective Ian Rutledge, and A Matter of Justice keeps the streak going.”
—Cleveland Plain Dealer

The Washington Post calls the Ian Rutledge novels by Charles Todd, “one of the best historical series being written today.” A Matter of Justice—the eleventh in the New York Times Notable, Edgar® Award-nominated, and Barry Award-winning series—brings back the haunted British police inspector and still shell-shocked World War One veteran in a tale of unspeakable murder in a small English village filled to bursting with dark secrets and worthy suspects. A New York Times bestseller as spellbinding and evocative as the best of Ruth Rendell, Anne Perry, Martha Grimes, and P.D. James, A Matter of Justice represents a new high for this exceptional storyteller.

“There’s no end to war in Charles Todd’s unnervingly beautiful historical novels....Here the mother and son who write under the name Charles Todd get it all right.” — New York Times Book Review

“What has distinguished the Rutledge series from other historical crime fiction is that it often transcends the whodunit formula with its concerns about the morality of war and the terrible toll it took on the British nation.” — Pittsburgh Post-Gazette

“In the stellar 11th Insp. Ian Rutledge mystery, Todd seamlessly combines a fair-play whodunit with a nuanced look into the heart of darkness in the human soul.” — Publishers Weekly (starred review)

“A wonderfully plotted mystery will keep you engrossed and guessing right up to the end....This terrific read will please longtime fans and those new to the series.” — Romantic Times

“Another triumph...This is a historical mystery that should be used as a guide on how to do it right. Intriguing and complex, this is a superbly rich novel and a real treat for mystery fans.” — Crime Spree magazine

“With its typically intricate plotting, detailed characterizations, and red herrings, this is a compelling addition to the popular Ian Rutledge series.” — Library Journal

“The plot is as complicated as any that Agatha Christie contrived, with characters as dark and complex as any of P. D. James’....Just the ticket.” — Wilmington Star News

“This series makes the anguish of the First World War and its scarred veterans as fresh as our own. Lovers of the British cozy will enjoy the range of settings, from cottage gardens to the remote Scilly Isles to fine country estates.” — Charlotte Observer

“A sharp look at a country recovering from the devastation of war. Although it is set in the early 20th century, Todd’s novels are timeless.” — South Florida Sun Sentinel

“Charles Todd hasn’t made a misstep yet in his elegant series featuring Scotland Yard detective Ian Rutledge, and A Matter of Justice keeps the streak going.” — Cleveland Plain Dealer

“Few people writing today are as deft as Todd at creating historical fiction....A Matter of Justice is an intricately plotted mystery dealing with the lingering effects of yet another war.” — Winston-Salem Journal

“Literate and wise, A Matter of Justice combines a plot worthy of Christie with characterization reminiscent of [P. D.] James and a profound melancholy that channels [Ruth] Rendell....The discerning reader with find not only intellectual stimulation but also moral enlightenment.” — Richmond Times-Dispatch

“A compelling book, as Charles Todd’s books always are. It seizes the reader’s interest at the very first page and keeps it until the end.” — Mystery News