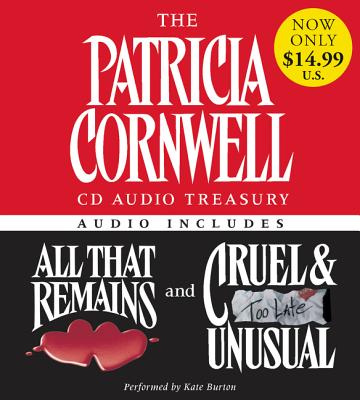 Two great Patricia Cornwell audio titles for the price of one. All that Remains and Cruel and Unusual.

A serial killer is loose in Richmond, specializing in attractive young couples whose bodies are invariably found in the woods months later –– minus their shoes and socks. Chief Medical Officer Dr. Kay Scarpetta finds herself tracking a killer who scrupulously eliminates every clue, rendering all her

forensic skills useless. This time it's her courage and intuition on the line in a race against time.

When convicted killer Ronnie Joe Waddell is executed in Virginia's electric chair, he becomes what should be a routine case for Chief Medical Examiner Kay Scarpetta. But after Waddell's execution, everyone connected to him begins to die – including a member of Scarpetta's staff. When crucial records disappear from her files, Scarpetta comes under fire for incomeptence. Caught in a web of political intrigue, she must fight to free herself from murderous insinuations and threats to her own life. She soon finds herself retracing Waddell's bloody footprints, following a trail that might lead to long–hidden secrets deep within the state government. Either the truth will set her free – or unleash upon her a punishment both cruel and unusual.

Patricia Cornwell is recognized as one of the world’s top bestselling crime authors with novels translated into thirty-six languages in more than 120 countries. Her novels have won numerous prestigious awards including the Edgar, the Creasey, the Anthony, the Macavity, and the Prix du Roman d’Aventure. Beyond the Scarpetta series, Patricia has written a definitive book about Jack the Ripper, a biography, and three more fiction series among others. Cornwell, a licensed helicopter pilot and scuba diver, actively researches the forensic technologies that inform her work. She was born in Miami, grew up in Montreat, North Carolina, and now lives and works in Boston.

Kate Burton has made numerous stage, film, and television appearances, and was seen on Broadway most recently in Hedda Gabler and The Beauty Queen of Leenane. She played the title role in Alice in Wonderland with her father, Richard Burton, on PBS.