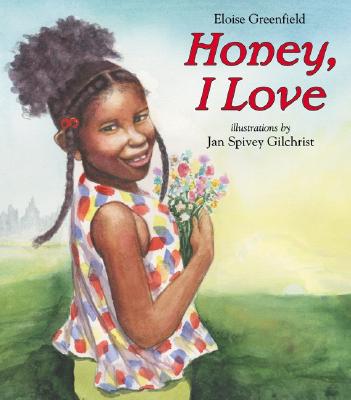 To one young narrator, it's the simple things that mean the most, like sharing laughter with a friend, taking family rides in the country, and kissing her mama's arm.

When this poem was first published in 1978 in Honey, I Love and Other Love Poems, Eloise Greenfield reminded us that love can be found just about anywhere. Now, twenty-five years later, she and celebrated children's book artist Jan Spivey Gilchrist present a stunning, newly illustrated anniversary edition that invites readers to celebrate the simple joys of loving and living.

Eloise Greenfield’s first book was published in 1972. She was the author of forty-eight children’s books including Honey, I Love and Other Poems and The Great Migration. She received many awards, including the 2018 Coretta Scott King - Virginia Hamilton Award for Lifetime Achievement. Eloise was a beloved children’s book creator whose pioneering voice, especially for the Black American experience, has made her an inspiration to many generations of readers.

Jan Spivey Gilchrist is the award-winning illustrator-author of seventy-four children's books. Dr. Gilchrist illustrated the highly acclaimed picture book The Great Migration: Journey to the North, winner of the Coretta Scott King Honor Award, a Junior Library Guild Best Book, an NAACP Image Award nominee, a CCBC Best Book, and a Georgia State Children's Book Award nominee. She won the Coretta Scott King Award for her illustrations in Nathaniel Talking and a Coretta Scott King Honor for her illustrations in Night on Neighborhood Street, all written by Eloise Greenfield. She was inducted into the Society of Illustrators in 2001 and into the International Literary Hall of Fame for Writers of African Descent in 1999. She lives near Chicago, Illinois.

"The verses are simple, with flowing language and limited rhyme and repetition. Gilchrist’s pictures fill the pages with large realistic portraits brimming with the warmth and pleasures of childhood. Their size and clarity make these books good candidates for toddler and preschool story hours as well as for one-on-one sharing." — School Library Journal